Step-by-step to Durban and Beyond 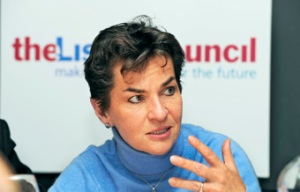 Only weeks before the Conference of the Parties 17 in Durban, South Africa is set to begin, Christiana Figueres, Executive Secretary of the UNFCCC, was in Brussels for the Robert Schuman lecture, organized by the Lisbon Council. Ms. Figueres outlined the priorities for the CoP 17 and urged civil society, business, and nations to do their part in fighting climate change.

To believers that climate change policy can be made in a day, Ms. Figueres pointed out that Robert Schuman himself took a step-by-step approach to realize his dream of a lasting peace in Europe. This policy-grafting approach may be slow, too slow in fact, to address the urgent need to transform our economy to a low-carbon one. All the same, the approach is viewed as successful. However, building peace from the rubble of World War II is where the parallel ends. Preventive action is required in the case of the environment, and not resuscitation after the damage has been done.

One of the major set-backs in at the CoP 16 in Cancun was the effort to agree on a continuation of the Kyoto Protocol, which expires in 2012. Without such an agreement, the efforts to continue with a broad mitigation framework are severely hampered and the ongoing negotiations do not show a light at the end of the tunnel. In addition to this, the European Union has been attempting to ‘blackmail’ the other Parties to agree on the issue by stating that if they accept a new commitment period (provisionally named “Kyoto II”), the EU will raise its greenhouse-gas emissions target to 30% (from the current 20%). In Ms. Figueres’ viewpoint, this is a lackluster attitude which has received a similarly lackluster response from the Convention. In similar fashion, if industrialized countries take a serious, ambitious, and vigorous approach to an agreement on mitigation and the Kyoto Protocol, they will receive a similar answer from the rest of the Parties.

Furthermore, after the fiasco at CoP 15 in Copenhagen, business leaders had become pessimistic at best about the Cancun negotiations. The fact that an agreement was produced shocked the business world into believing in the process once more. “The Cancun agreements comprised the most comprehensive package to help developing nations”, Ms. Figueres stated. There is little need to point out that infrastructure building and technology transfer, as agreed by the Parties, opens up enormous markets for business in developing countries.

“The business success of tomorrow is born on the low-carbon opportunities of today.”

Even so, it is a widespread belief that business needs a strong signal from policy-makers in order to act on environmental issues. Adoption of the step-by-step approach means that this ingredient is weak and slow. At the same time, businesses are instrumental in the interpretation of the supply and demand structures of the modern market, and can therefore potentially send strong signals to governments. Ms. Figueres labeled this the “vicious circle” of climate change mentality. However, this can be reversed into a virtuous circle if businesses manage to introduce a change in consumer and supplier behavior and send a strong message to governments that the people are not satisfied with business as usual. More specifically, when it comes to changes in industry and energy, national leaders require input from the market.

Entrepreneurship, as a strong component of capitalism, is the key to the puzzle. Ms. Figueres received input from Harry Verhaar, senior director for energy and climate change at Philips, and Harry van Dorenmalen, chairman of IBM Europe. Both emphasized that there is no “quick-fix” for climate change, but that technology is the most important component. They stressed the position that people are not fully aware of the role technology can already play in contributing to a low-carbon economy.

Mr. Verhaar pointed out that, in addition to technology, we need a policy framework, financing, and communication to tackle climate change. Due to the step-by-step approach at the UNFCCC, the first aspect is slow in its development. In the context of the economic and debt crises, financing has become a taboo subject. However, for businesses, financial systems also mean discovering a new way of budget-building and implementation – one that focuses on an optimization of cost-benefit ratios and emphasizes efficiency. As for communication, he stressed that there are many eco-innovators and they need to disseminate their ideas, improve interaction with citizens, and work together.

In agreement, Mr. van Dorenmalen introduced the need for another component – leadership. So far, policy-makers have not provided the required level of strong leadership to drive the policy process forward. If business was to step in, it would also be observed that a company requires strong leadership to implement the changes paramount to the transfer to a low-carbon economy. Tapping into talent internationally means the use of modern social media and the grouping of ideas. To set the wheels in motion, CEOs and business leaders have to assume a strong leadership position.

In answer to these views, Ms. Figueres presented an open question to all eco-innovators: “Are you collectively being vocal enough to at least balance, if not drown out, the corporate voices of those who see no benefit in action?” This also applies to consumers and civil society organizations – there has to be an informed balance between climate change skeptics and extreme environmentalists.

As individuals, it may be hard to change the world by replacing a single light-bulb, but even a journey of a thousand miles begins with a single step. Global climate negotiations are a step-by-step journey, and we can only hope they are heading in the right direction.